It was the first year of the reign of Darius the Mede, the son of Ahasuerus, who became king of the Babylonians. During the first year of his reign, I, Daniel, learned from reading the word of the Lord, as revealed to Jeremiah the prophet, that Jerusalem must lie desolate for seventy years. So I turned to the Lord God and pleaded with him in prayer and fasting. I also wore rough burlap and sprinkled myself with ashes.

For I know the plans I have for you,” says the Lord. “They are plans for good and not for disaster, to give you a future and a hope.

But they almost always skip verse 10:

This is what the Lord says: “You will be in Babylon for seventy years. But then I will come and do for you all the good things I have promised, and I will bring you home again.

There are times when I think I focus too much on trying to see the forest from the trees, but sometimes I think it is important to ignore the forest and just deal with the trees for which you have given responsibility. Help me to be faithful with these trees.

Then there is Daniel’s response, from I can learn as well. Help me to be pained by my country’s sin, and help me to start with my own repentance. I should probably be more burdened for the impact my country’s sin has on the poor and/or vulnerable. What impact it has on children. What impact it has on the elderly. Marriages. Friendships. Isn’t it interesting that our temptation as Americans is to read this passage and find hope. Daniel’s response was to be convicted, heartbroken and repent. Let it convict me as well.

God has now revealed to us his mysterious will regarding Christ—which is to fulfill his own good plan. And this is the plan: At the right time he will bring everything together under the authority of Christ—everything in heaven and on earth.

Part of me wants to sit and talk about whether or not Paul was right or wrong. Another part wants to sit and contemplate what your plan is. What exactly are you doing? But that’s a fool’s errand, and I am certainly in no position to form such opinions. No, I think it’s a mistake for me to try to figure out your plan. After all, what will it gain me? What will it gain the world to know your plan for the next 2,000 years? I said a long time ago that you keep me on a need-to-know basis and I very rarely need to know. Those words are as true now as ever.

What I need to focus on is worshipping you today, and being so in tune with the Holy Spirit that I can hear his voice giving me guidance at any given moment. So here is my worship to you. It’s from Daniel 2:19-23:

That night the secret was revealed to Daniel in a vision. Then Daniel praised the God of heaven. He said, “Praise the name of God forever and ever, for he has all wisdom and power. He controls the course of world events; he removes kings and sets up other kings. He gives wisdom to the wise and knowledge to the scholars. He reveals deep and mysterious things and knows what lies hidden in darkness, though he is surrounded by light. I thank and praise you, God of my ancestors, for you have given me wisdom and strength. You have told me what we asked of you and revealed to us what the king demanded.”

Father, you gave Daniel the information you needed him to have without burdening him with information he didn’t need. Please do the same for me. Give me wise counsel for others. Give me insight into the activities that should get my attention and energy. Move through me and bring others to yourself through my life. Be glorified in me so the world might know how amazing you are. And as you choose to raise up leaders here and there, I trust that you are doing exactly what you need, not necessarily for my person good in this moment, but for our good in the long run. It’s all about you and not about me. I am yours.

In Jesus’a name I pray,

Posted by John D. Willome on November 6, 2020 in Daniel, Ephesians 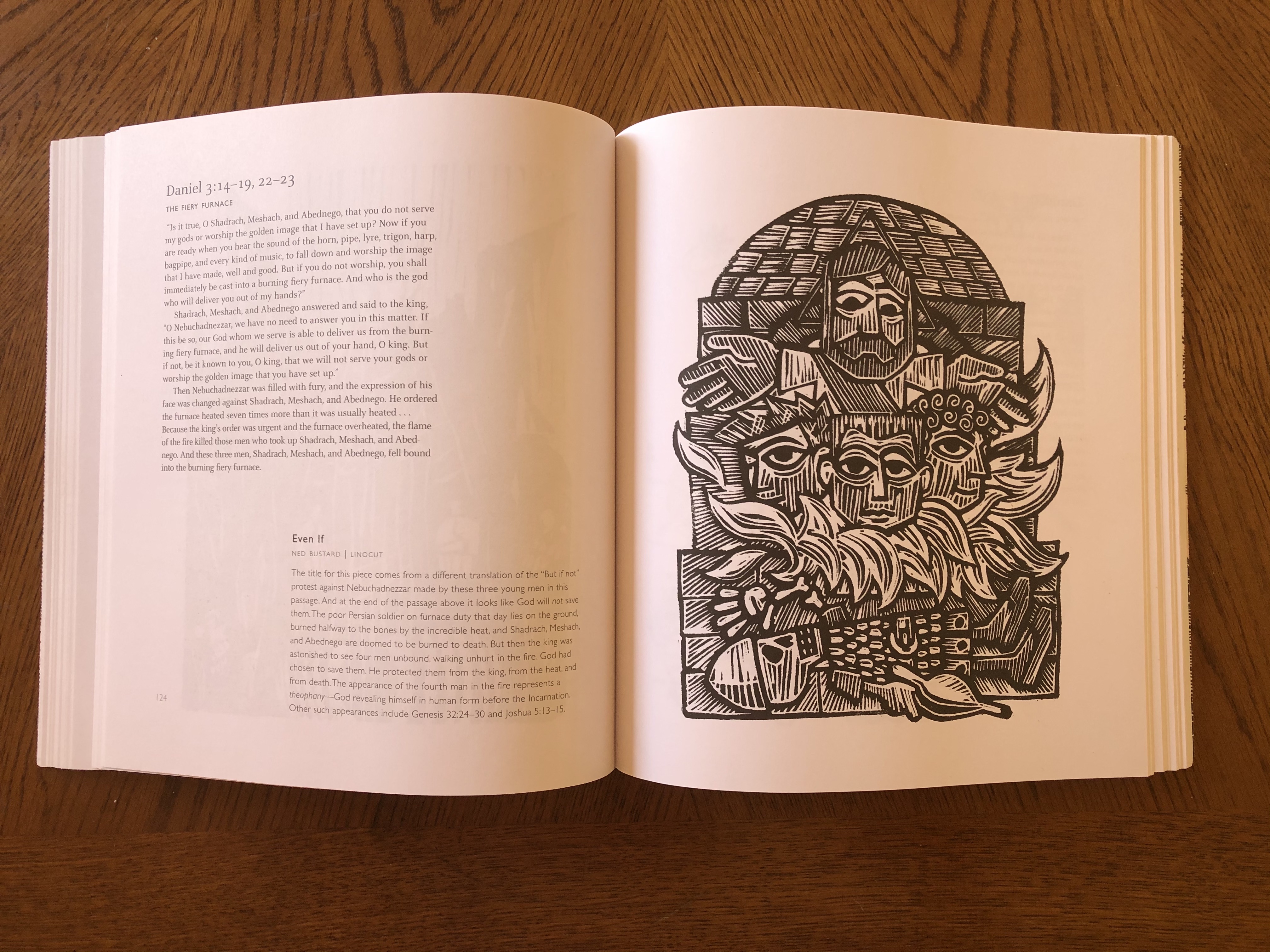 Dear God, before I get into the artwork that accompanies this story, I want to spend a little time with a revelation that I had. Christians/Jews in the Bible who were living in exile or under the rule of a non-Jewish/Christian king didn’t seem to complain about persecution. Whether it was Shadrach, Meshach, and Abednego in this story or Paul, Peter, or any of the other martyrs in the New Testament, they seem to take it in stride. Now, I’m sure they were scared and frustrated, but they seemingly dealt with that internally and with you. Externally, however, they just worshipped you through it.

Contrast that with how a lot of Christians respond to what they call “persecution of Christians” in our country today. First, I hardly think it can be called persecution in light of what real persecution looks like. But I hear a lot of whining about Christians being persecuted. Outside of the enforcement of the separation between church and state rules that have been set up, I’m not even totally sure what they’ve been referring to. And maybe I have only a limited picture because I live in the South where there are still large parts of the community that honor faith, but even so, whining is not how to be a witness for you. In this case, Shadrach, Meshach, and Abednego influenced the king by their faith in action, not by complaining to him that he was being unfair. Paul and Peter were the same way. Letting our faith shine in the midst of trials is what changes hearts. Complaining only makes others tune us out.

Okay, with that being said, let me take a look at this image created by Bustard and see what I see before I read his description.

With that said, here is what Bustard said about his piece “Even If.”

The title for this piece comes from a different translation of the “But if not” protest against Nebuchadnezzar made by these three young men in this passage. And at the end of the passage above it looks like God will not save them. The poor Persian soldier on furnace duty that day lies on the ground, burned hallway to the bones by the incredible heat, and Shadrach, Meshach, and Abednego are doomed to be burned to death. But then the king was astonished to see four men unbound, walking  unhurt in the fire. God had chosen to save them. He protected them from the king, from the heat, and from death. The appearance of the fourth man in the fire represents a theophany–God revealing himself in human form before the incarnation. Other such appearances include Genesis 32:24-30 and Joshua 5:13-15.

Posted by John D. Willome on October 27, 2019 in Daniel, Revealed: A Storybook Bible for Grown-Ups